All tours are available with pickup from the Livorno cruise port.

Visit Volterra and San Gimignano with a luxury vehicle and an English speaking driver.

Your driver will meet you directly at the dock and will be waiting for you when you disembark (from Livorno Cruise Port).

Enjoy a complete private tour and visit the ancient medieval villages of San Gimignano and Volterra.

Also we can arrange Pick-up directly from your Hotel or Private Address. ASK QUOTE 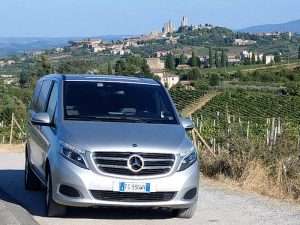 San Gimignano‘s cultural and natural patrimony have been recognized by Unesco, but even more impressive is the medieval skyline made up of the 14 remaining towers and the views from above and below them. San Gimignano rises on a hill (334m high) dominating the Elsa Valley with its towers which date back to the 11 century.

The town increased in wealth and developed greatly during the Middle Ages thanks to the “Via Francigena” the trading and pilgrim’s route that crossed it. Such prosperity lead to the flourishing of works of art to adorn the churches and monasteries.
On 8 May 1300 Dante Alighieri came to San Gimignano as the Ambassador of the Guelph League in Tuscany.

In 1348 San Gimignano’s population was drastically reduced by the Black Death Plague throwing the city into a serious crisis which eventually led to its submission to Florence in 1353. In the following centuries San Gimignano overcame its decline and isolation when its beauty and cultural importance together with its agricultural heritage were rediscovered.

Once in San Gimignano, other than admiring the famous towers, you can also see the “Duomo” or Collegiate Church, the “Palazzo del Popolo”, the “Palazzo Nuovo del Podestà” (which is now the town hall), S. Agostino Church, the Museum of Holy Relics, and the infamous Museum of Torture, which displays early instruments of torture and reminds everyone that cruelty and violence existed even way back then. On a lighter note, there are numerous shops which sell local products including the “Vernaccia” wine.

After the visit we’ll proceed to Volterra.
The town was a Neolithic settlement and an important Etruscan center with an original civilization; it became a municipium in the Roman Age.
The city was a bishop’s residence in the fifth century and its episcopal power was affirmed during the twelfth century.
With the decline of the episcopate, Volterra was the subject of the interest of Florence, which defeated Volterra many times though rebellions sometimes took place. When the Florentian Republic fell in 1530, Volterra came under the control of the Medici family and later followed the history of the Grand Duchy of Tuscany.

Duration of the private tour San Gimignano and Volterra:
8 hours or 10 hours